These stats will cover:

The major trends in donations, charitable giving and fundraising

64% of donations are made by women (You go girls!) Source

Americans donated about $358.38 billion to charity in 2014; the highest total in the report’s 60-year history. Source 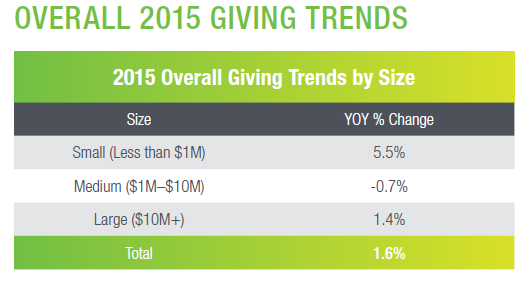 In 2015, overall charitable giving in the US increased 1.6% on a year-over-year basis. Large organizations grew by 1.4%, medium organizations declined 0.7% and small non-profits grew 5.5% compared to the same time period in 2014. Source

Individual giving raked in $258.51 billion, an increase of 5.7 percent in current dollars (and 4.0 percent with inflation-adjusted) over 2013.

Foundation giving brought in a whopping  $53.97 billion, which was 8.2 percent higher than in 2013 (the increase was 6.5 percent with inflation-adjusted). 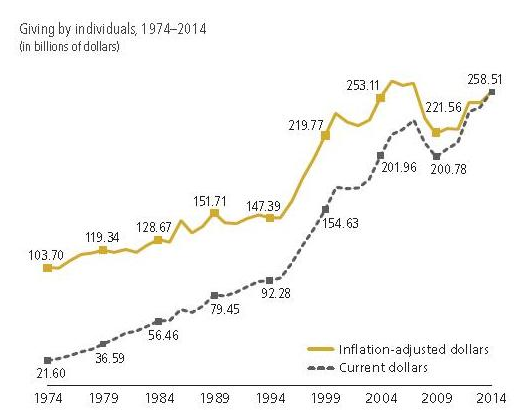 After a slight drop following the most recent recession, individual giving has been on the rise  in both current and inflation-adjusted dollars for the last couple of years, although it has not recovered to pre-recession levels. Source 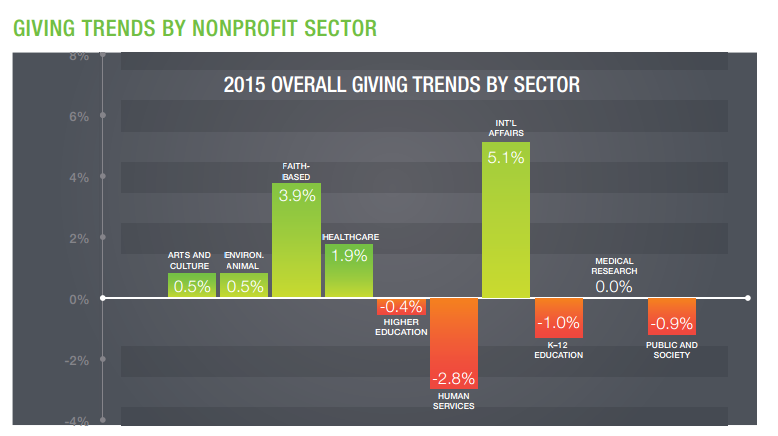 International Affairs organizations had the largest increase in year-over-year fundraising with 5.1 percent growth. This was followed by Faith-based non-profits, with a growth rate of 3.9 percent. Healthcare organizations grew 1.9 percent on a year-over-year basis. Both Arts & Culture and Environment & Animal Welfare sectors grew 0.5% when compared to 2015. There were four sectors (Human Services, Higher Education, Public & Society and K–12 Education) that experienced a year-over-year decline in overall fundraising. Non-profits in the Medical Research sector had flat performance when compared to 2014. Source

The best day and time to promote your donations, charitable giving and fundraising

Globally, the total value of mobile donations via PayPal in December of 2012 was 242 percent larger than the year before.  Source 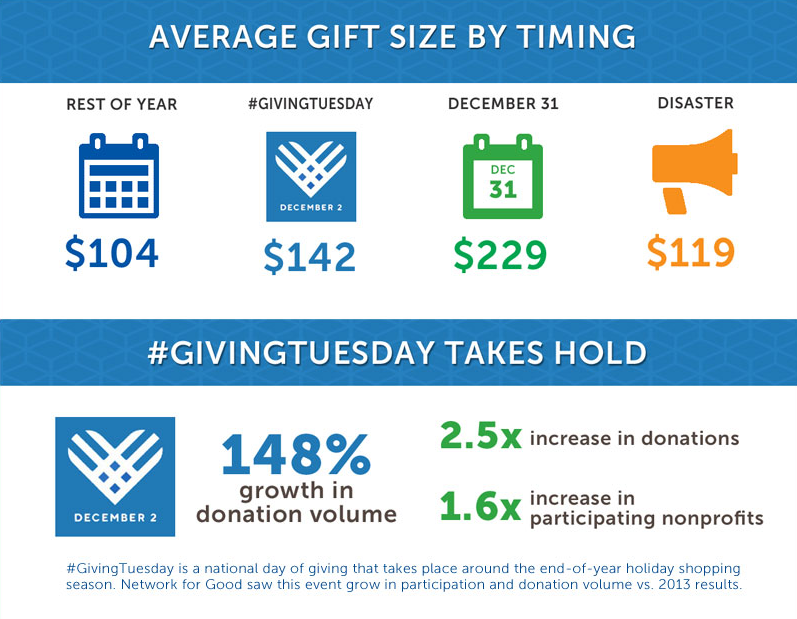 A recent COP study focused on high net worth donors (defined as households with income greater than $200,000 with a net worth of over $1,000,000) found that 42.7 percent of those surveyed gave more during the holidays than the rest of the year. However, a generous 44.4 percent reported giving “about the same.”  Source 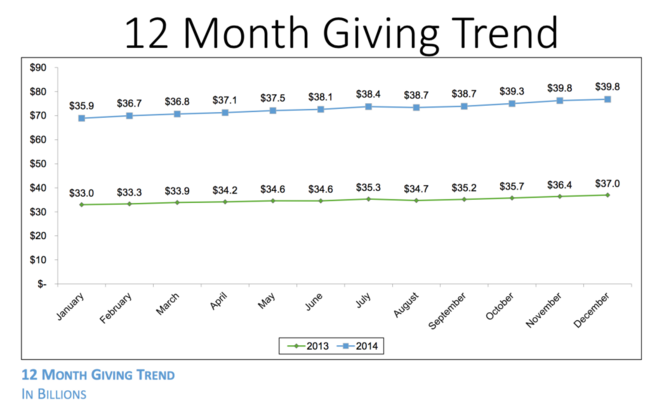 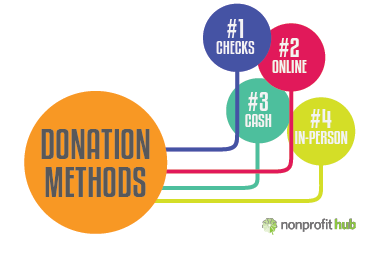 More than 68 percent of those surveyed said the highest volume of donations come in the form of checks, while another quarter said checks were the second most popular donation method. Online credit cards are the second most popular method. In fact, 20 percent of non-profits said credit cards are their highest volume, with 42 percent saying it is number two. Cash stayed in a steady third place, ahead of in-person credit card transactions and ACH. Source

Online donations on #GivingTuesday 2015 were up 52 percent compared to 2014. 17 percent of digital donations were made on mobile devices on last year’s #GivingTuesday. Source

Nearly 14 percent of all online donations in 2015 were made using a mobile device. Data shows that 43 percent of mobile transactions were made on an iPad®, 42 percent using an iPhone®, 14 percent on Android® devices and less than 1 percent using other devices like Blackberry® or the mysterious Windows® Phone. Source

Donors are 31 percent more likely to initiate a recurring gift on a branded donation page versus a generic one. Brand counts!  Source

A Pew survey of those who donated to the Red Cross by mobile during the 2010 Haiti earthquake showed that 50 percent of people donated immediately through their phone. 43 percent of the donors contacted friends and family from their mobile devices and asked them to give and 76 percent of those pleas were successful, which ultimately led to a viral campaign.  Source

PayPal was the top choice with 42 percent of respondents lending their praise. The next option was using a merchant provider such as Heartland Payments or the user’s own bank at 23 percent.  Source

More than 40 percent of all money donated (as reported by study participants) comes from Americans aged 49 to 67 years old, while more than 25 percent comes from Matures, 20 percent  from Gen X and 10 percent from Gen Y.  Source

The World Vision survey, conducted annually as part of their World Vision Gift Catalogue campaign, revealed that 56 percent of men ages 18-34 have given a charitable gift versus 36 percent of older men (ages 35 and above) and 37 percent of their female counterparts in the same age group.  Source

In Blackbaud’s generational giving study, 57 percent of the Millennials surveyed reported a desire to see the impact of their donations directly. “They respond to a culture of innovation,” Tripp says, “Millennials want to be engaged by charity brands that are doing things better, innovating, solving a problem.” Some might even go further.  Source

Strong pluralities of Matures (48 percent) and Boomers (45 percent) say that monetary donations make the biggest difference. The focus on money, however, declines with age. Only 36 percent of Generation X and 25 percent of Generation Y think they can make the most difference by donating money. Conversely, Gen Y donors believe they can make the biggest difference by volunteering (30 percent) and by spreading the word to others about the charity and its work (18 percent). But while they value volunteering, Gen Y donors are actually less likely than Matures to say they have actually volunteered for a cause in the past year.  Source 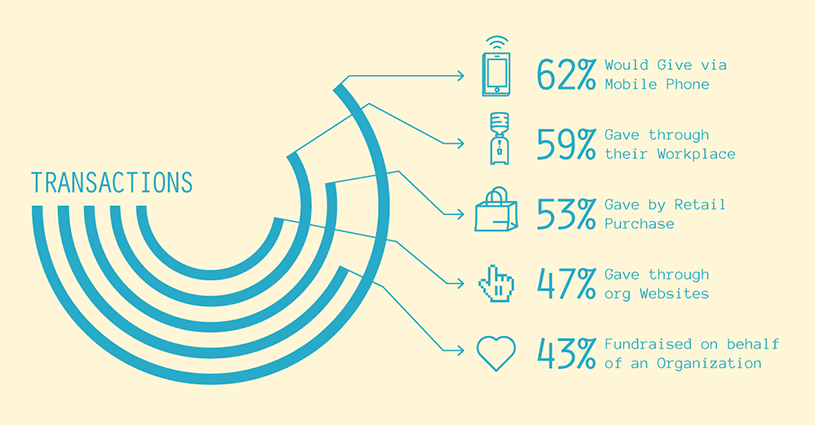 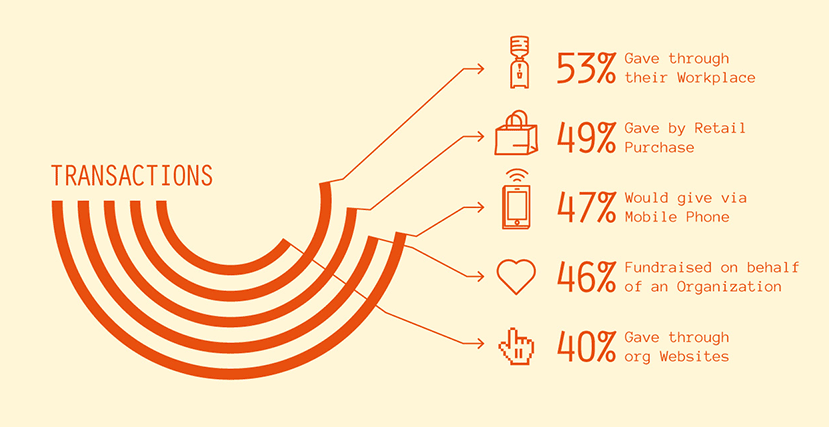 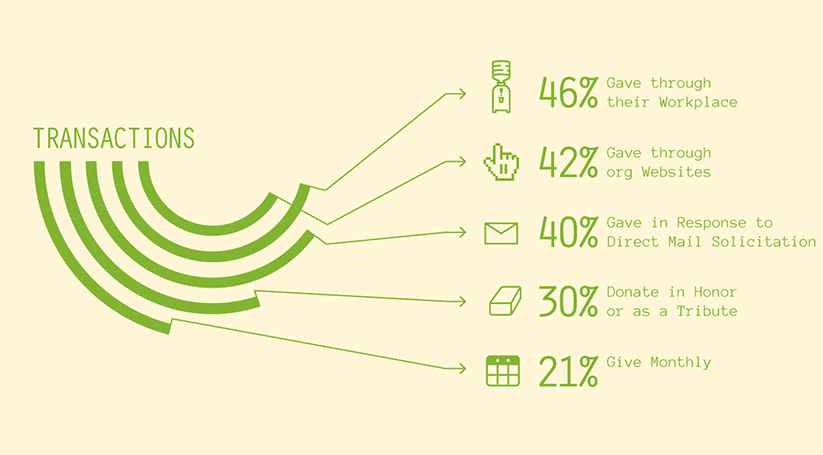 52 percent of Matures donated in response to a direct mail solicitation, 34 percent gave in honor or as a tribute, 88 percent of this generation gave an average of $1,367 per year across 6.2 charities. Source 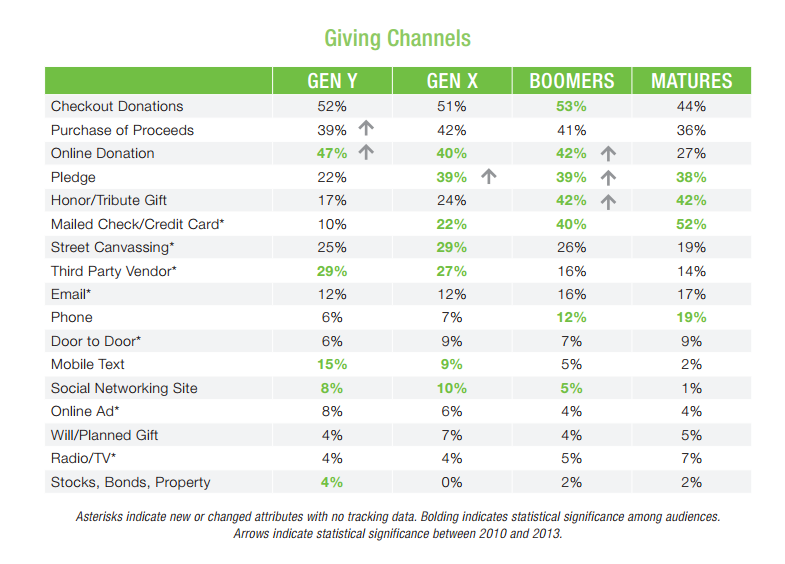 Among Generations X and Y, more donors report giving online than by snail mail over the past two years. As many Baby Boomers, the dominant giving generation, say they donated online (42 percent) compared to mail (40 percent). In comparison to 2010, when more Boomers were giving via the postal service, we can see the landscape is changing.  Source

One-third of those surveyed said visiting an organization’s website is extremely or very important. Gen Y respondents were most likely to choose this ranking; 44 percent said as much, as did 39 percent of Gen X, 28 percent of Boomers, and 18 percent of Matures.  Source 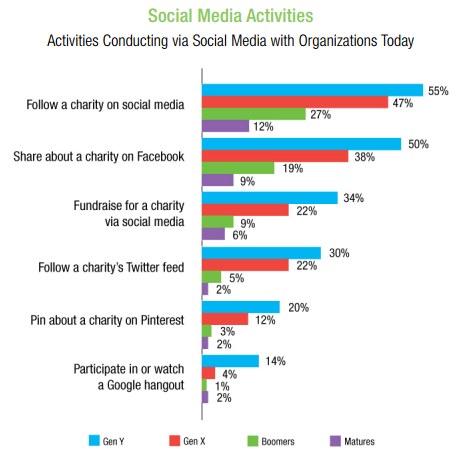 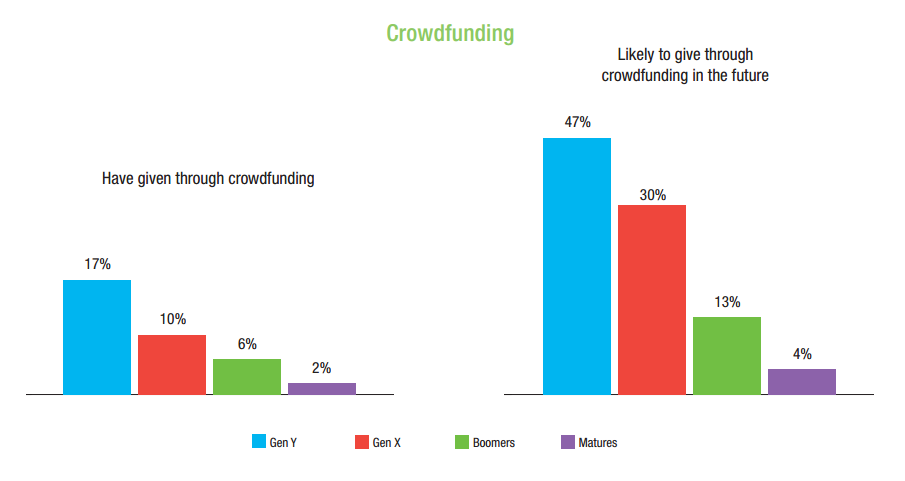 Specifically, 17 percent of Gen Y donors said they had given to a crowdfunding campaign in the past, and 47 percent say they would consider doing so again in the future. But, enthusiasm for the crowdfunding craze declines with age. Among Matures, only 2 percent said they have given in this manner and less than 5 percent said they would consider doing it again. Gen X appears persuadable, but Boomers might be a tough sell. Source 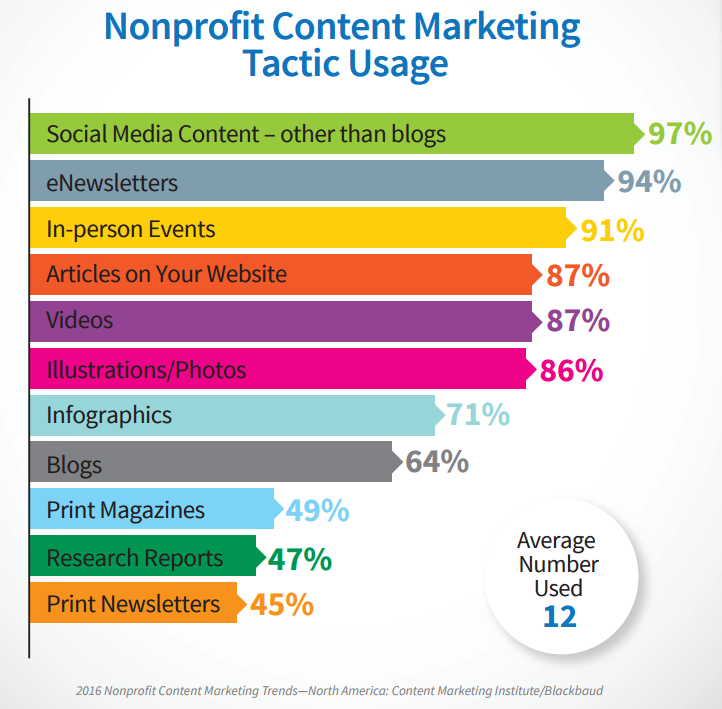 What content marketing tactics does your organization use? 97 percent use social media content to stir up the buzz.  Source 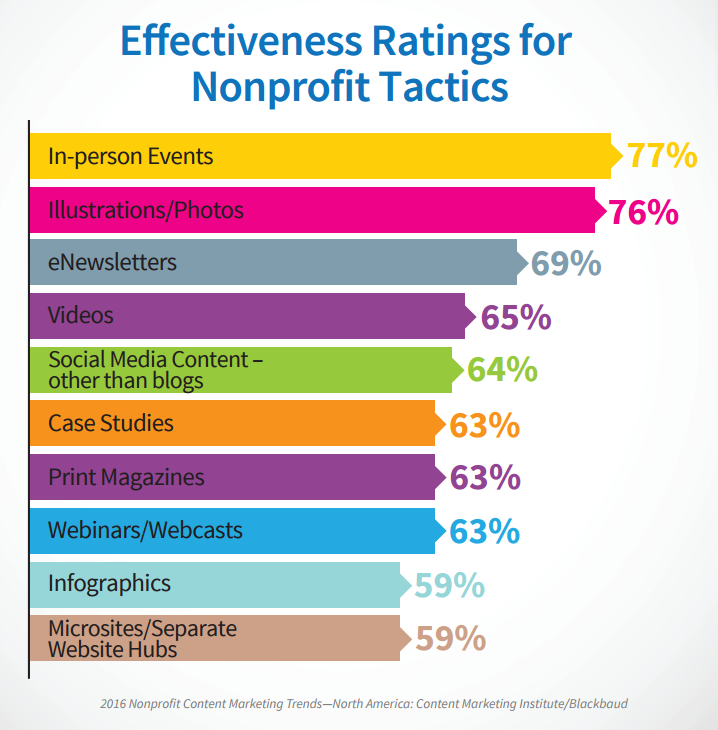 How effective are the tactics your organization is using? In-person events and illustrations as well as photos top the list. Source

Based on 2015 plans, when it comes to direct mail, frequency still remains in question across the industry. 28 percent will send an email monthly, 26 percent will send one quarterly and 8 percent are merciless, sending one out every other week. Source 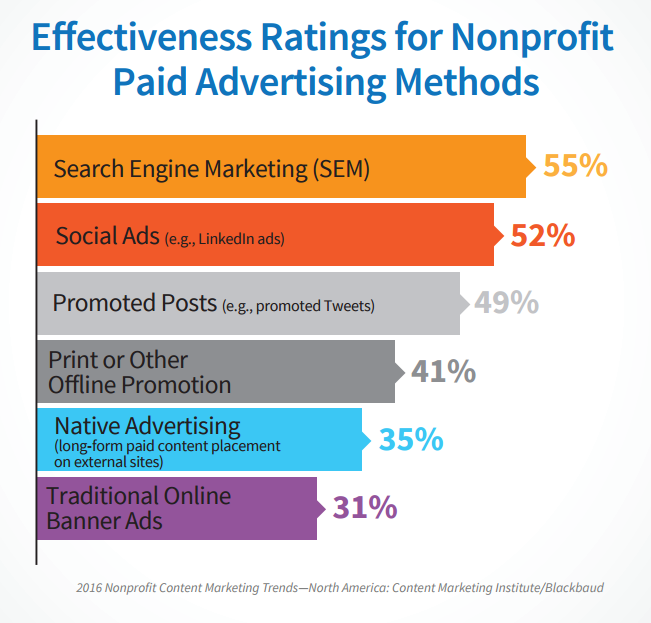 E-Newsletters are still winning the popular contest, with 41 percent of non-profits sending them monthly and 23 percent sending them out quarterly. (90 percent are sending an e‐newsletter at some point during the year). Source

More than one-third of organizations did not send a single email to new subscribers within the first 30 days of them signing up. Source 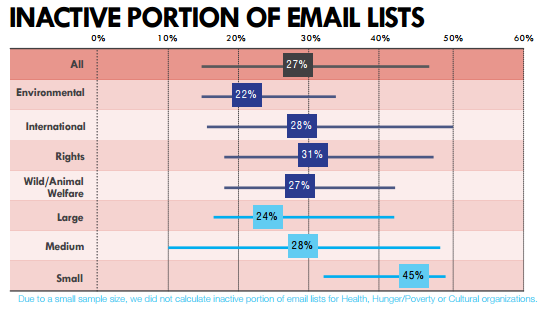 When we asked groups about their “inactive” segment, 47 percent responded that they suppress inactives in some way. Source 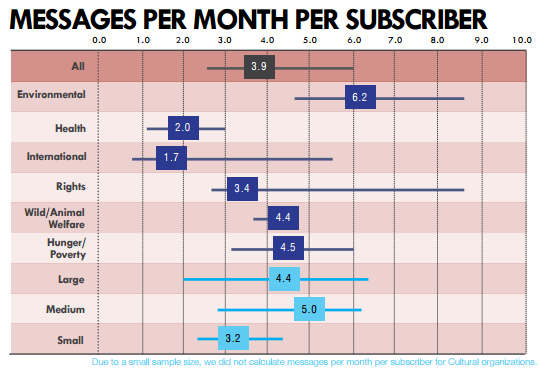 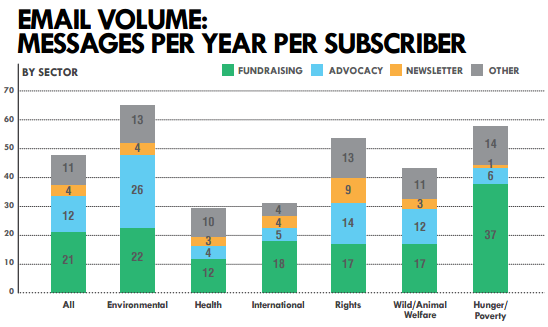 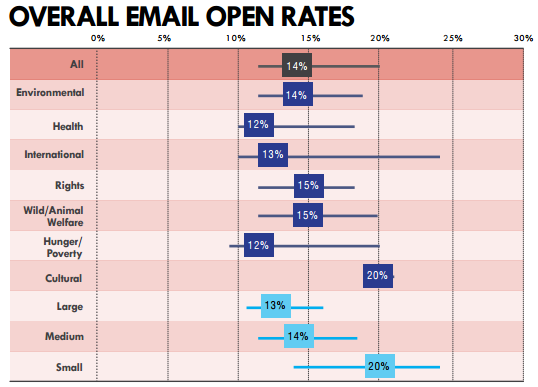 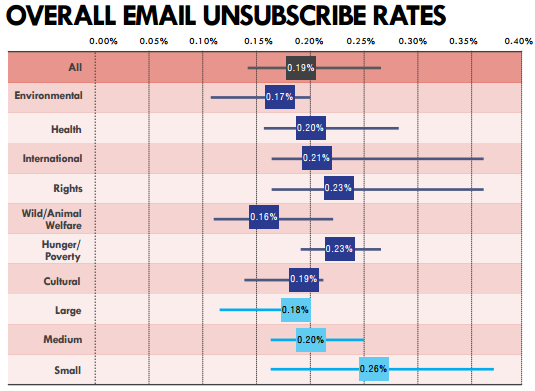 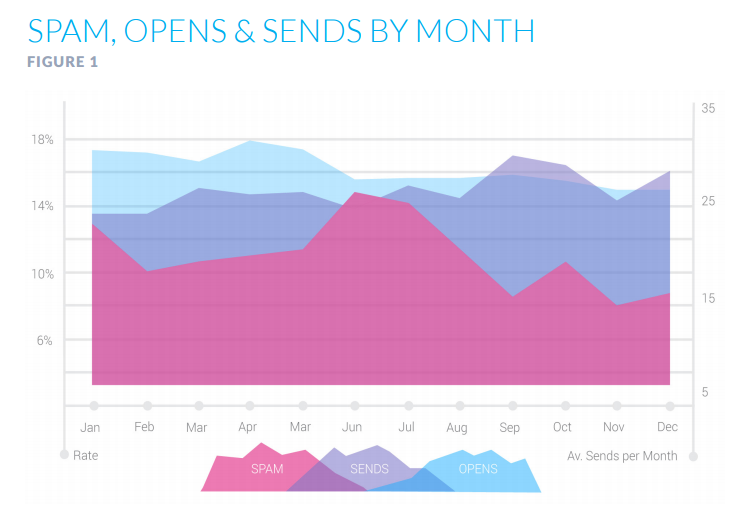 Non-profits could potentially increase email revenue by 14 percent for every percentage of their email that is heading directly to spam.  Source

In 2014, for the 55 organizations studied, #GivingTuesday saw an average of 11.63 percent of their fundraising messages going to spam.  Source

84 percent of non-profits haven’t made their sites mobile friendly. Source

More than 8 out of 10 landing pages are NOT optimized for mobile. Source 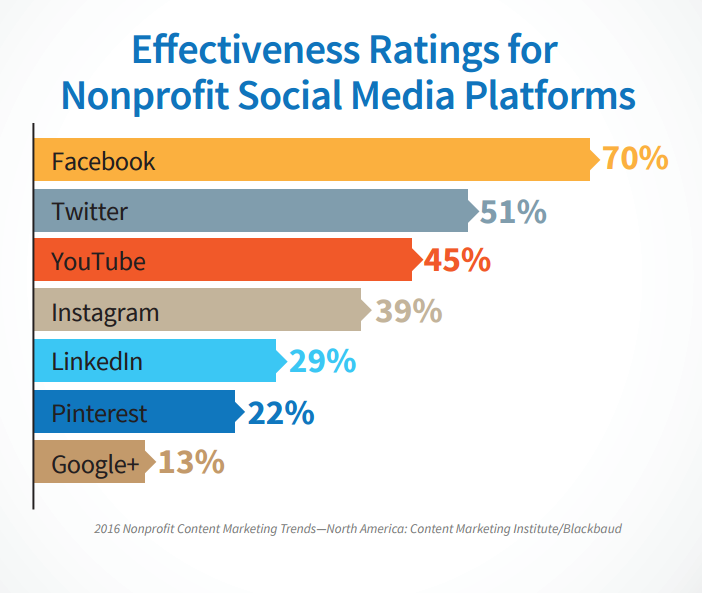 Facebook is rated as the most effective social media platform when it comes to the giving game. Source

Audience growth on social media continues to be quite high. While email subscriber lists grew by 11 percent in 2014, Facebook and Twitter audiences grew by 42 percent and 37 percent respectively. Source 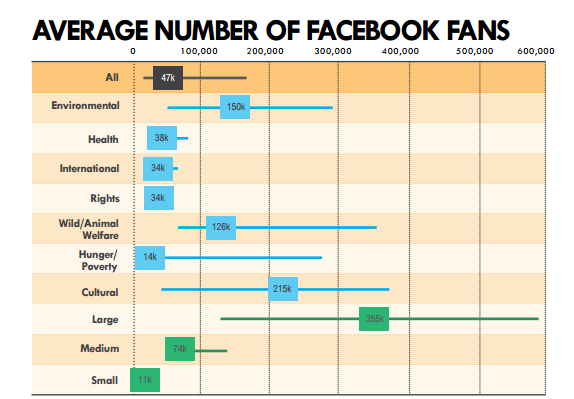 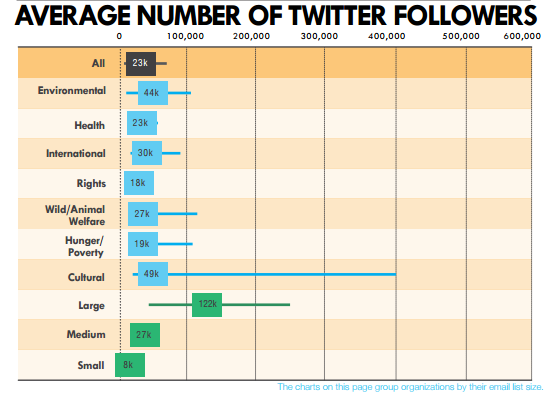 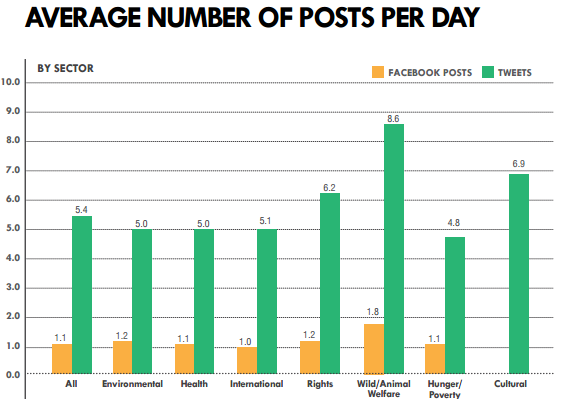