Barbie has been a polyurethane friend to millions of girls worldwide since long before I came into existence. Her silky blonde hair, pin thin legs and exceptionally perky plastic breasts haven’t really changed much since her original debut on the toy scene in March 1959. I mean just look at her – she doesn’t have much to complain about.

Despite her unrealistic proportions, Barbie dolls have been strewn about playrooms for decades. My mother had a Barbie collection before me, my sister had Barbies – every little girl I knew when I was a little girl had a Barbie or six to play with. Basically, she’s the head chick in charge in the land of toys. And as the reigning queen of the toy box, it would be hard to imagine another doll stepping to her grandeur 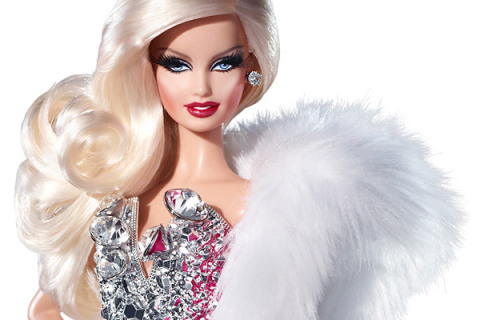 The thing is, concerns have been raised time and time again about how Barbie’s platinum blonde hair, long legs and miniature waist are impacting young girls’ ideas of beauty standards. If Barbie were real, she would have a 16” waist, a child’s size 3 shoe, and legs 30% longer than any regular woman (supermodels included). And with impressionable minds idolizing Barbie and her unachievable good looks, we’re kind of setting young girls – and boys – up to be faced with wild and unwarranted expectations of themselves.

Because I am a woman, and was once a girl (Cue Britney Spears’ “I’m not a girl, not yet a woman” PLEASE) – it’s easy to see in hindsight all the toxic influences that created insecurities about my appearance, when I was just trying to make it through highschool with my head still on my shoulders. From magazines and advertisements to the toys young girls play with, there is always a major focus on appearance and how that relates directly to your value as a woman. You want to be respected? You better use this mascara. You want to bag yourself a man? You better get the latest ombre. You want to play with dolls? They better be hotter than you could ever hope to be.

Full-time artist and researcher Nicholay Lamm decided he wanted to challenge the status quo and developed a doll for kids with realistic proportions – an ‘every girl’ kind of doll. “I wanted to show that average is beautiful,” explained Lamm, “In my first project, I showed how distorted fashion dolls are in relation to typical human body proportions. This got me thinking, what if fashion dolls were simply made off of standard female body measurements?”

Media went wild! Lamm’s project was featured on the Huffington Post, Good Morning America and CNN (just to name a few) – and the people began to ask “Where can I get this doll?” In March 2014, 55 years from Barbie’s original debut, a crowdfunding campaign was launched and over 19,000 of Lamm’s dolls were pre-ordered.

The question remained – were kids really going to want to play with an average girl? People were skeptical that a typical brunette with a normal figure wouldn’t be able to overpower the omnipresent Barbie. But sometimes, instead of adults and marketers speculating, you have to ask kids themselves. Maybe, just maybe the kids will surprise you.

With exclamations like “She looks like my sister,” the kids chimed in. And the results? Well, they certainly made me feel warm and fuzzy inside. The beauty business and the way we market to impressionable young women is a constant battle. I was inspired by Lamm’s project because it goes to show that there are alternatives to what we’ve widely swallowed as ‘the norm’. We can start setting up girls for success and empowering them from a young age.

Because who runs the world? Girls.