If people ever needed a reason to believe in the power of personal branding, they just need to look at politicians to understand its influence. A personal brand is a politician’s biggest asset, as its what makes people believe in them, rightfully or not. Just look at newly appointed prime minister, Justin Trudeau – before every major public debate, where he would be meeting his opponents head on, Trudeau made sure to be seen being active. One time, he visited a boxing gym, and another he paddled a kayak near Calgary. This active lifestyle was part of his personal brand, and it attracted people to him. He recently admitted that he left his opponents “in the dust”, thanks, in part, to his personal brand.

Trudeau is definitely not the only politico to rely on the power of a personal brand to appeal to voters. With the United States prepping to elect a new president in late 2016, multiple candidates are prepping their brands, hoping to get an edge on the other candidates. This tactic is bipartisan, with candidates from both parties – the parade of republicans and the five democrats – trying to only put the best image of themselves out there, branding their image and trying to ensure that it’s loyal to their core message: “Elect Me”.

There is no politician relying on their brand power as heavily as Donald Trump. The polarizing public figure has run his campaign like it is an episode of The Apprentice, and he’s trying to fire all of the other candidates until he is the default choice.

There are many examples of Trump exerting his brand power and most times, it’s to get out of a situation. His critical and often fictional statements have been scorching him recently, and he is using his big, bad boss image to salvage what he can. Just this week, he yelled at Bill O’Reilly, asking O’Reilly if he is expected fact check every thing that is promoted on his Twitter account (and yes, he is expected to), and defended himself against The New York Times, when they were angered after he appeared to mock one of their reporters who has a physical disability.

While it may seem that his actions and bold statements are political suicide, for Trump, they are fuelling his campaign because he is sticking true to his brand. He’s not flip flopping, he is standing by his statements, no matter how callous or insulting they are. And those who see him as a breath of fresh air in the American political wrestling ring are cheering him on. Donald Trump’s personal brand is his most used tool for his campaign, and it might be strong enough to get him elected.

Let’s talk about the hottest girl on Instagram right now, and it’s not a Victoria Secret model. Democratic presidential candidate, Hillary Clinton, is using Instagram to showcase her personal brand. Her posts illustrate believing in feminine power, which, as the first female presidential candidate in history, is a huge aspect to her campaign. She wants to show that wearing a skirt and having different private parts doesn’t mean she won’t be able to handle the job and she is illustrating it perfectly.

Clinton and her team also use Twitter to illustrate her personal brand and her belief in women. A perfect example is her homage to Shirley Chisholm in November.

It’s messages like this that underline her brand: she’s a smart, educated, experienced candidate that will do her best, if given the opportunity. 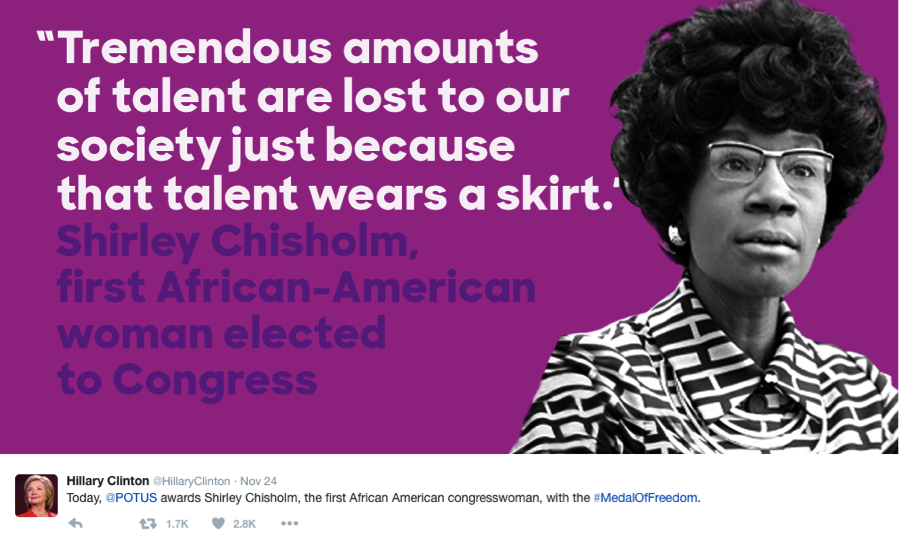 This year, Kim Davis made headlines when she refused to grant a marriage license to a same sex couple in Kentucky. When she was released from her brief time in prison, there were a couple of Republican candidates vying to be at her side and show support for their definition of family values. Ted Cruz and Mike Huckabee were both eager to show their support with the hashtag #ImWithKim. Huckabee was even standing beside Davis as she left the prison with “Eye of the Tiger” blasting from somewhere, probably someone’s pick up truck.

Religion and traditional (re: boring) family values are deeply embedded into the Republican brand, and therefore most candidates hoping to run under the Republican banner have to make it an integral part of their personal brand. It would be political suicide not to, and that is why candidates are desperate to show their support for people to epitomize those traditional values, whether valid or not.

The personal brand is like the little bow that ties the entire package together. While it is critical in many industries – Miley Cyrus is a perplexing study in personal branding – it’s absolutely vital to politicians, as it is the perceived image that many people vote for. Personal branding should not be underestimated, and if anyone should be grateful for theirs, no matter how brash, is Donald Trump.