I’ve put together 40 amazing Higher Education Marketing stats from 2014 and 2015 since it’s so hard to find these stats online. I hope this helps you out, higher education marketers, enjoy!

How Students Choose a University or College

#2
The plurality (45%) view the main benefit of a college degree as “a potentially better job and a higher income” (down 6% from the plurality of 51% that chose this answer in 2014). Thirty-one percent chose “exposure to new ideas” and 24% see “education” as the primary benefit. Source

#3
Sixty percent of marketing officials who responded to the survey said they created a brand strategy to increase awareness of their institution, while 38 percent reported that the goal was to meet enrollment benchmarks. Source

#5
Supporting the idea that brand strategy initiatives are a newer trend for higher education, 61 percent of respondents said their brand work started within the past five years. Forty-two percent were motivated by increased competition and 38 percent said a directive from the president was the reason for pursuing a brand strategy initiative. Source

#6
More than half of those surveyed said they would measure the success of their strategy through growth in enrollment or fund-raising. But, about a quarter of respondents said they had no plan to formally measure whether the branding project was successful. Source

#7
The number of chief academic leaders reporting that online learning is critical to their long-term strategy has reached a new high of 70.8%. Source

#18
Eighty-eight percent of American teens ages 13 to 17 have or have access to a mobile phone of some kind. And a majority of teens (73%) have smartphones. Smartphone users skew more toward older teens with 76% of 15- to 17-year-olds having a smartphone, compared with 68% of 13- to 14-year-olds. About a third of teens (30%) have a “basic” cell phone. About 15% of teens have both types of phones. Source 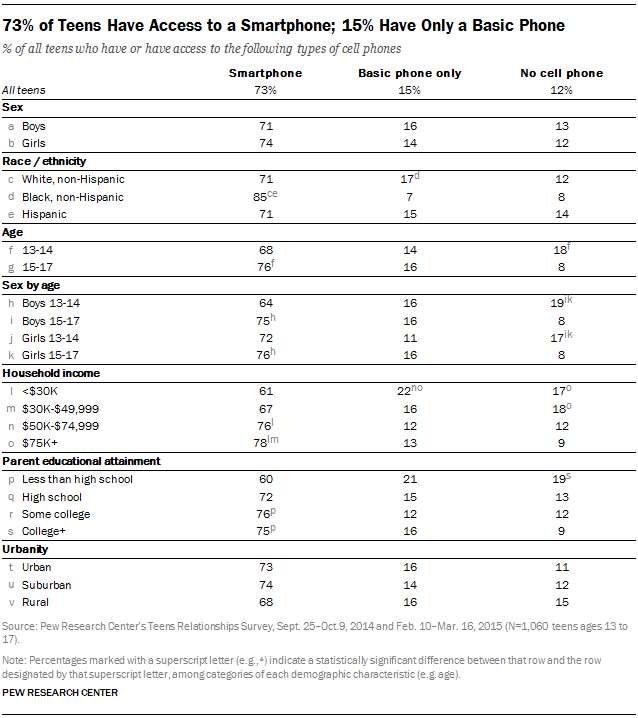 #20
Seventy percent of students have looked at a college website on a mobile device (up from 68 percent in 2013). Source

#21
Forty-three percent of students reported using their mobile devices for all of their web browsing. Source

#22
There were 1.04 billion daily active users on Facebook on average in December 2015. Source

#26
Facebook remains the most used social media site among American teens aged 13 to 17 making up 71 percent of all teens using the site, even as half of teens use Instagram and four out of ten use Snapchat. Source

#27
A majority of teens — 71% — report using more than one social network site out of seven platform options they were asked to choose from. Among the 22% of teens who only use one site, 66% use Facebook, 13% use Google+, 13% use Instagram and 3% use Snapchat. Source 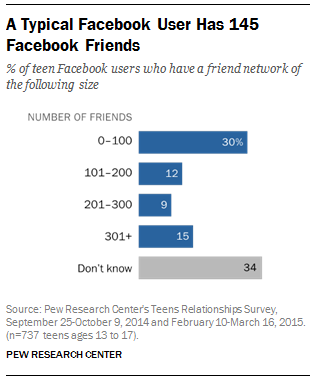 #31
The Instagram community has grown to more than 400 million strong in 2015. Source

More than half (52%) of all teens report using Instagram to share photos and video with friends, with girls substantially more likely to use it than boys (61% to 44%). Source

#35
In May 2014, Snapchat reported 700 million photos sent per day on the app, with 500 million Snapchat Stories. Source

#37
Forty-seven percent of older teens 15 to 17 send snaps, while 31 percent of younger teens do so. Older girls are the most likely than any teen group to use the service, with 56% using Snapchat. Source

#38
As of the fourth quarter of 2015, the microblogging service averaged at 305 million monthly active users. At the beginning of the 2015, Twitter had surpassed 302 MAU per quarter. Source